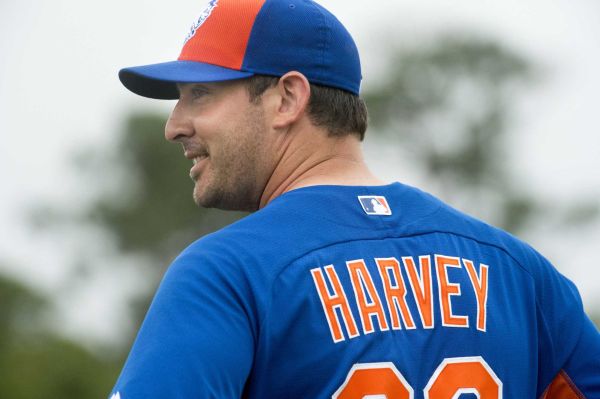 As a big superhero and comic book fan I can immediately draw parallels from Matt Harvey to the most recent Batman films. Matt Harvey began pitching in the majors in 2012 and the league was in the palm of his hands. With heat sitting at 95-97mph and all of his off speed stuff being untouchable the future was looking bright. Unfortunately, The Dark Knight fell victim to Tommy John surgery in 2014. He then came back strong and led the Mets to a pennant in 2015. In 2016 he fell victim to Thoracic Outlet Syndrome which once again ended his season prematurely. At this point I would compare Matt Harvey to Harvey Dent (Two-Face) rather than the hero we know as Batman. You don’t know what side you are going to get. The stellar front line starter and hero of your fantasy team or a shell of himself and a wasted high draft pick. Judging from the most recent Thoracic Outlet Syndrome research and his recent spring starts I have reason to believe vintage Harvey will come back strong this year. You should invest while his ADP is still as low as it is.

The beginning of this spring was looking shaky for Harvey as projected. Judging from his rough spring start the Mets organization was not sure he would be ready to start the season in the rotation. His control was not looking sharp. The negative effects of the surgery and vast amount of injuries he has suffered throughout his career seemed to have taken a toll on his velocity. Many experts believed his arm strength will never come back. Learning how to adapt and how to be a control pitcher with diminished velocity seemed like the next step for Harvey. While he could be a serviceable pitcher for a real life team with diminished velocity, that is not what fantasy owners that value K’s and dominance from their starting pitcher would like to hear.

In his latest spring training start against the Braves he gave fantasy owners like myself a reason to believe he can dominate again. He started to round into shape and began the game letting it go. Sitting at 95mph and topping out at 97mph. His breaking pitches were looking sharp and the most important part was he was getting hitters out. He went 6 innings allowing only 2 runs. This is an excellent sign even though it is just spring training. It is increasingly looking like he at least has the potential to come back and return to his vintage form, in what could be a make or break year for him.

There are many pitchers that have come back successfully from Thoracic Outlet Syndrome. Josh Beckett, Mike Foltynewicz, Phil Hughes, and many others picked up right where they left off about 10 months after the surgery. Being that Harvey is only 28 years old he should be a big bounce back candidate. The risk is intermediate but the reward can be huge. Showing he still has the ability to reach back for extra heat at times to get out of a jam or when he needs it definitely helps his case. I believe he should come back strong this year and as a wise fantasy owner I would advise you to try to get ahead of the curve.

The Dark Knight will rise again.